A Lesson in Branding from the NFL 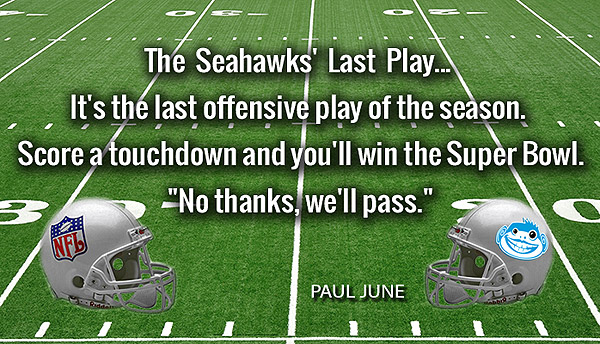 While I didn’t really have a “dog” in this show—my favorite team, the Oakland Raiders haven’t even got a whiff of the playoffs in a decade plus—being a west coaster, I was rooting for the Seattle Seahawks to be crowned champions again this year. One miracle catch had them poised to repeat, but a questionable goal line play call, an interception seemingly out of nowhere, and undoubtedly a few cardiac arrests by fans of both teams later, and the New England Patriots were winners of their fourth SuperBowl in 13 years.

Love ‘em or hate ‘em, the tandem of Bill Belichick and Tom Brady gets things done . . . and has been getting things done for 14 years and counting. In fact, let’s include a third person in that grouping, creating the Patriots “Trinity,” owner Bob Kraft who bought the team in 1994.

So what’s the reason for the Patriot’s success and their ability to sustain it over the years?

Naturally, much of it has to do with having the right mix of athletes and coaching at the right time, plus some good old-fashioned luck. But as a brand builder, I can’t help but attribute a good deal of New England’s success to the organization’s ability to craft and live its own brand story, both internally and externally.

As an organization, New England seems to be one of those few NFL teams that remains consistent to who they are and “why” they are, with a well-defined vision and clear objectives. It’s classic Branding 101, and I have to believe it has something to do with their owner, who also just happens to own Kraft Foods, another major brand success story. Clearly, Mr. Kraft “gets it” and I’m betting he makes sure the rest of the organization, from the head coach to the practice squad to the ball boys, “gets it,” too.

Of course, there have been a few pock marks on the Patriot’s road to success. Like most organizations, there have been some missteps along the way—such as the “Spy-gate” scandal where Coach Belichick was accused of and fined $500,000 for illegally videotaping opponent defensive signals; the arrest and current trial of tight end Aaron Hernandez for murder; and, of course, the most recent “Deflate-gate” controversy where the Patriots stand accused of using underinflated footballs in their AFC championship victory over Indianapolis. But the strength of their brand, the strength of the “Patriot Way,” has allowed them, thus far, to weather any and all storms thrown their way.

Here’s is my insight into the “Patriots Way” (granted, I don’t have any knowledge of the inner workings of the Patriots machine, so consider this an outsider’s perspective looking in):

It will be interesting to see, in the not too distant future, when the careers of QB Tom Brady and Coach Belichick come to their inevitable ends, and when the elder Mr. Kraft eventually rides into the sunset, if those left behind—the new head coach, the new starting QB, and Jonathan Kraft (his father’s heir apparent)—can continue the Patriot’s strong brand performance.

Some businesses have done it. Disney had a bit of a rocky path after Walt’s death, but eventually righted its ship in the early 1980s to cement itself as one of the world’s most enduring brands. Apple has had a few “hiccups” of its own since founder Steve Jobs died in 2011, but if the first quarter of 2015 is any indicator, Apple is again on its way to record profits.

“I think people in America today, it’s not just about money,” Kraft said back in 2013, commenting on what he considers the ‘Patriot Way.’ “They want to be connected to something they feel is special and when they get up every day, they look forward to coming to work. We try to create an environment here that does that. We’re not always successful, but we give it our best shot.”